When we were in college, Erick surprised me with a new puppy.  A black labrador retriever.  Neither one of us really thought this through.  Erick bought this little bundle of black fur for a steal and drove the 3 hour car ride to my parents' house where I was home on break.  When he arrived, I opened the door to see Erick and a little puppy standing there with wobbly legs and big brown eyes looking up at me.  Two of my best guy friends came over that night to hang out with Erick, me and our new puppy.  We all tried to come up with the perfect name for her.  I was going for the cute names but the guys weren't having it.  We were all huge Pittsburgh Steeler fans so the name Steeler was suggested.  I wasn't convinced but Mark and Dan kiddingly said that they would not call her anything but Steeler and that would certainly confuse the dog.......  so, there you have it, it's settled.  Steeler it is.

We both had to return back to our universities where neither one of us were allowed pets at our apartments/houses.  Erick had arranged for his youngest sister, Anne, to watch Steeler while we were away at school.  Erick's mom wasn't a huge dog lover so there were some rules about where Steeler would stay in the house; the basement.  Like all puppies, Steeler was a chewer.  No, a destructive chewer!  She ate just about anything that she could in that basement.  She eventually grew out of that, I graduated from college, retuned back to my parents' house to live, and Steeler had a new home with me.

In 1998, Erick and I  purchased our first home in Edgewood.  Steeler would now have a permanent home with us.  Steeler was probably the best dog I've ever had or known (sorry for my current dog Penny).  She was so kind and gentle.  She never left our yard and when Olivia arrived home in 2003, it was love at first sight.  Steeler was always sitting near her.  Once Olivia started to crawl, walk, and interact with Steeler, they became even closer.  Olivia LOVED her Steeler dog. 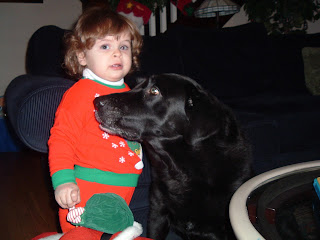 In July of 2008, we sold our house in Edgewood but hadn't found a house to move to at this point.  We decided that we'd rent an apartment in Oakmont since that is where we ultimately wanted to buy.  We'd rent there and get a feel for the area, get used to the bus route and commuting, and then look at the houses that were for sale in the area.  Olivia would be starting Kindergarten in the fall.  Since I worked for the University of Pittsburgh, Olivia would be enrolled in the University Child Development Center Kindergarten program.  She had already attended the program for day care/preschool so this was a very simple transition for her.  We'd enroll her into public school once she entered first grade.  It made life easier for us too.  Erick would drive me and Olivia to her school, which started at 9am, then I would walk/bus a few city blocks to my office.

The apartment that we were renting from only allowed dogs that were under 30 pounds so Steeler, our 90 pound pet,  was again moved from her home to live with my parents.  Steeler didn't mind because she LOVED my dad.  She could get all the salami and bologna that she wanted from that guy!  One day in September, my dad called me at work to say that Steeler had a massive growth on her left shoulder.  It appeared out of nowhere.  I called the vet and got her in right away to be seen.  The doctor informed me and Erick that Steeler had what appeared to be bone cancer.  At her age, 12, there was nothing that we could do but to keep her comfortable.  The doctor sent us home with some heavy pain medications for her.  Erick and I did not feel right leaving Steeler with my parents so we wrote a letter to our landlord asking permission for our dying dog to reside at our third story apartment.  We may have stretched the truth a little and said that Steeler was under 50 pounds......  but I din't care.  Steeler was worth it.

Every morning, Erick would have to carry Steeler downstairs and outside of the apartment complex so that she could go to the bathroom.  After Olivia and I would come home from work and school, I'd have to somehow hold up Steeler's upper body so that she didn't have to put much pressure on that shoulder as she come down the 3 flights of steps.  Typing this story makes me feel like this was a bit cruel but it didn't last long.  In mid October, Erick got up to get Steeler outside and he came back into our bedroom crying.  He told me that he's making the executive decision that we're going to put Steeler down today.  She can no longer stand up on her own.  Olivia was still sleeping in the second bedroom so I got up and called then vet.  "I think it's time to put her down", I say.   Hearing those words come out of my mouth was  heartbreaking.  The receptionist tells me to just bring her in when we're ready.

Olivia is now up and getting ready for school.  Erick and I are getting ready for work.  Steeler is just laying on her bed.  We have decided not to tell Olivia what is going to happen until it has happened.  I don't know what the right thing is to do in this situation.  Olivia was only 5 1/2 years old.  The same age as Ainsley is right now........

We tell Olivia that we're taking Steeler to the vet this morning for a check up because she's not feeling well.  I put Steeler's bed in the back of our SUV.  Erick lifts up Steeler and lays her on the bed.  We drive to Olivia's school and Olivia gets out of the car.  She wants to say good-bye to Steeler.  I opened up the hatch back door and startled Steeler.  She must have leaned up against the door while we were driving.  She almost rolled our of the back of the car!  Holy shit, that would have been bad.  Olivia gave her buddy her final hug goodbye.  I walked Olivia into school and hugged her good-bye.

Erick and I then drove out to Murrysville where our vet was located.  We never changed vets once we moved from the Edgewood area.  We really liked that clinic.  Once at the clinic, Erick carried Steeler out of the car and to a door that was located around the back of the clinic.  I was given these instructions over the phone.  We entered the door and the doctor was waiting for us.  She kneels down to Steeler and says, "Your wheels aren't working anymore, huh?"  Erick lifts Steeler up onto an exam table, they explain what is going to happen, and just like that it's starting.  I am holding her head and looking into her brown eyes telling her what a good dog she is.  She is looking at me but  shifts her eyes to the needle that is inserted into her front paw.  She looks back up at me as I begin to cry.  I can hear Erick crying as he's petting her.  Just like that, she closes her eyes and her head falls heavy into my hands........  she's gone.  I turn and place my head into Erick's chest, he puts his arms around me, and we both cry.

Both of us decided to go to work after that.   I was useless.  I sat at my desk for the few hours that I was at work and cried for most of the day.  I remember calling my friend Tracey to tell her about Steeler.  I can't sit there anymore so I walk over to the Carnegie Library and ask the librarian to help me find books about losing a pet.  We find a few but one in particular will end up being my favorite, "A Dog Like Jack".

It is now time to leave and do what is going to be one of the hardest things  I can imagine, pick up Olivia from school.  I got to her school before Erick did so I went in and whispered to her teacher that Steeler had died and that Olivia would not be at school the following day.  Olivia and I walk outside towards Erick as he is waiting for us in the car.  Olivia's class made masks that day out of brown paper bags.  She has her mask on as she asks me, "Where's Steeler?"  I'm trying to avoid answering this because I want to wait until we are in the car.  She removes her mask and repeats her question to me but now demanding an answer.  I think she knew......  I bend down to Olivia's level, look her in the eyes,  and say to her, "She died."  I reach out to her and hug her as hard as I can.  She is so silent.  The ride home is equally silent.  That night, Erick reads "A Dog Like Jack" to Olivia.  I leave the room so that no one sees me cry again.  Once he  finishes, I return and sit with Olivia on her bed.   I can tell that she is so sad but is  holding it in.  She surrenders, breaks down and sobs.  She is truly sad and heartbroken.  I had never seen her sad before.  I've seen her cry but that was from skinning a knee, not true raw emotion.  Now my heart is breaking for her heart.  She curls up and lays against me and we both cry.  Our Steeler dog is gone.

The next morning, Olivia and I stay home.  We pull out tape, glue, paper, and all of the pictures that we have of Steeler and we make a memory book of our beloved dog.  What great therapy that was.    I still have the book.  It was in Olivia's room with her personal items.  As for the book, "A Dog Like Jack", we buried that with Olivia so that she'd always be connected with Steeler.