Let's go back in time to Friday, April 25, 2003.  I went to work that day as usual and had a good day at work with my awesome co-workders.  Usually on Fridays, it was slow so we did goof off quite a bit.  Our boss traveled a lot so goofing off was pretty easy.  I didn't say we didn't get our work done though.

That week, I started feeling tired again and my ankles would swell as I went through the day so I would put on a pair of slippers while sitting at my desk and put my feet up.  That would usually help but on Friday, it seemed to be worse.  I had one of our nurses check my blood  pressure and it was normal so I just chilled out with my slippers on for the day.

Around 4pm I made it home via the bus and walked through our kitchen door to meet our dog, Steeler.  Steeler was a 7 year old  black labrador retriever.  I let her outside to relieve herself and then I went upstairs to relieve myself.  To my surprise, I relieved myself before getting to the bathroom.  Oops.  I thought that I should call the doctor to see if that was normal because I've never had that happen, at least while being pregnant. Yes, that's correct, I've peed my pants in the past.  My friends can confirm my weak bladder from laughing too hard but this was a bit different.  After talking to the doctor on the phone, he suggested that I go into the hospital to be sure that my water didn't break.  This was ok but my due date wasn't until May 19th!  It's a good thing that I am a very prepared person because my overnight bag was already packed.  I took from my bedroom and sat out on my back porch waiting for Erick to some home from work.

Erick was stopping off after work to pick up chicken wings for our Friday night dinner so I knew that he would be a little late so I continued to wait patiently.  I was in no pain, no discomfort, and had no anxiety (which was odd since I tend to be an anxious person).  It was a beautiful Friday and Steeler and I  just sat outside while enjoying  the warm April breeze.  Finally, Erick pulled into our driveway which was located beside our detached garage.  He got out of the car with the chicken wings and looked at me with some concern sitting next to the overnight bag.  I told him to hurry up and eat because we're going to then hospital.  I remembered from those prenatal classes that the father should eat before going into the hospital because it could be a very long day/night.  Erick went into the house with Steeler following him and the chicken wings and he started stuffing wings into his mouth.  Erick is one of the most impressive chicken wing eaters I've ever seen.  He literally puts a wing into his mouth and within seconds  slides it back out and voila, it's just a clean bone.  So, stuffing these wings into his mouth wasn't a challenge for him.  Once he felt that the wings could sustain him for a potentially long night, we put Steeler back in the house and drove to the hospital which was only about 4 mile away.

We're now at the hospital and I'm in a room, hooked up to monitors and in a hospital gown because my water did break and I was in labor!  What?  OK, let's panic.  At this point, I have no idea what time it is and things are moving at a snail's pace.  I don't remember if things started to progress or if I started thinking that I  might  miss that window of opportunity for an epidural but there I was forehead to forehead with Erick and the anesthesiologist is behind me.  He opens up my gown to say, "What's all over your back?"   I told you that my acne would be a topic of conversation.  "It's acne." I tell him.  OK, the epidural is done and I'm laying in the bed when a doctor comes in with a little needle stick and he/she (I can't remember) sticks the needle into various spots on  both legs.  "Can you feel that?".  "Yes.."  "Can you feel that?"  "Yes."  Over and over again.  Yes, I can feel your poking my legs with a needle and yes, it sort of hurts! The freaking epidural didn't take.  So here comes my buddy again to stick another epidural into the spine of my acne back.  This time it works and I was feeling just fine.

I think it's now about 4am and I still have no baby.  I was dosing in and out of sleep when a female resident physician comes in to do an internal exam.  She tells us that she can feel the baby's head and that we should be ready to push soon.  Shortly after that, the attending physician, Dr. Thomas, comes in to see me and he also does an internal exam but doesn't say anything.  He leaves the room and returns with a sonogram machine.  He does the exam on my belly to reveal that  he wasn't feeling the head, rather it was a baby' bum!  Yes, the baby is breech.    Dr. Thomas very calmly gives us all of the options and facts about delivering a breech baby and I'm suddenly signing consent for a cesarean.  Not the way I had planned this at all!

I'm now being wheeled down a hallway with Erick by my side and taken into a room with very bright overhead lights.  My arms are strapped  out and down which was terrible and I'm given an oxygen mask while a nurse stands over my head like a prison wardon.  I'm not sure which one of those, the arms strapped down or the suffocating oxygen mask, were more uncomfortable.  In no time, I'm feeling my body being tugged at and Erick is holding my hand but trying to stand up to peak over the sheet that block us from my lower body.  I kept saying to him, "Stop looking.  You're going to pass out."  As long as I've known Erick, I've never known hime to pass out so I'm not sure why I said that.

Finally, I hear, "It's a girl"  then, silence.  I could hear the slapping sound but no crying.  It felt like an eternity.  Minutes went by with jus the slapping sound, my whole world paused.  For everything that went wrong today, was it going to end like this?  After my heart stood still, we heard it, a cry.  There she was all 5 pounds 8 ounces of her.  Erick said that her feet were smacked up right next to her ears.  She was completely folded in half.  Oh, but I still can't see her because I'm strapped down. with the prison guard above me.

The next thing that I remember is waking up in my original room.   I looked over to my right  to see Erick holding a tiny little baby while feeding her a bottle.  After all of that, I was too out of it to nurse and let alone hold my new  baby.

It's time now for me to be transferred to a new room so they put me in a wheelchair and hand me my baby, who has no name at this point.  A nurse start pushing me like t it was some kind of race because I was going at record speed through the halls of the hospital.  So fast, that I started feeling ill and had to hand over my baby to the nurse so that I could close my eyes to stop the nausea.  Gosh, this sucks!

After a few hours, I am now feeling capable of holding and loving my new peanut of a sweet baby girl.  We are reminded that  visiting hours will begin at 11am and we have no name for our baby girl.  I knew her name. I always did.  I just never committed to it officially until April 26, 2003. 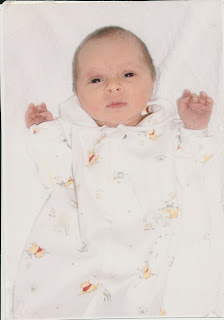