It's a beautiful Saturday morning.  I have scheduled the four of us to get family photos taken at the nearby mall.  I had bought matching blue shirts for the girls and they wore khaki cargo pants.  I wanted it to be very relaxed so the girls were in their bare feet for then photo shoot.  Looking back..... I am SO THANKFUL that we had family photos taken because that would be the las time. 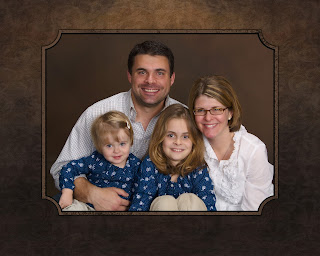 It is St. Patrick’s Day 2012 and we're back from our family photos.  We've all changed out of our picture clothes and into something green.  It was an unusually warm and sunny day in the Pittsburgh area.  Like with any nice day, Olivia’s friend Hannah would see Olivia playing outside and would cross our street to  join her.  Hannah, a girl from an Irish family was decked out in Kelly green shorts and 2 pony  tails with green pompoms.  Olivia only had limited time to play since she had an indoor soccer game that started at 1pm at Pittsburgh Indoor Soccer Association (PISA).  She was a bit disappointed that she had to end her play time with Hannah to get ready for soccer to the point  that she was a bit resistant to do so.  I remember slamming my hand down on her white desk in her room to let her know that I was a bit annoyed.  Annoyed at what?  I think it was just me and my short temper, which was unnecessary.  Olivia just looked at me with a little bit of remorse in her eyes and I looked back at her the same.  I continued to get her ready for soccer; blue shirts today.  Same blue shirt and shorts that she would be buried in.  Her soccer team was blue and white.  She was a member of the Harmar Soccer Club U-9 girls team, the Harmar Cheetahs.  U-9 meant that the girls were under the age of 9 (the girls were all 8 or 9 years of age depending where their birthdays fell in the calendar year).  I pulled Olivia’s hair back into a pony tail.  She had such thick hair; like me. 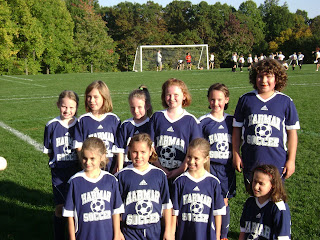 My parents were at my house to watch Ainsley since the soccer game was during nap time.  My dad, who is a very handy person, came to the house with a broomstick in hopes to fix the girls’ playground ladder; which had broken off.  The playground that we had in our backyard was purchased as a used one.  I bought it off of a gentleman through Craig’s List.  The nice man disassembled the wooden playground, loaded it onto his trailer bed, then drove it to our house.  It was the best $200 that I had spent!  My dad would fix the ladder then meet us at Olivia's game.
Erick, Olivia, and I left our house a littler early for the soccer game because we had to stop off at Lowe’s to order new bedroom carpeting for Olivia’s new bedroom.  We were moving Olivia into the bigger of the two main level bedrooms and moving Ainsley into the smaller one.   Olivia and Erick had already finished painting her new bedroom walls a beautiful lavender color so carpeting was our next step to the room swap could begin.  We had ordered her new bedspreads that were a cheerful yellow color and her room would be accented in teal blue.  We were going to put two single beds in her room in case a friend was sleeping over or if Ainsley wanted to sleep in her big sister's room.  I think Ainsley would have loved doing that.  In my head, I can still picture how it was supposed to look.  I had purchased her some cool artwork of dogs playing with soccer balls.  Our good friend Dan was building a desk for her room that looked like a doghouse.  I never did get to see the finished product; if he had finished it.  I don’t think I want to see it.
Erick and Olivia dropped me off at Lowe’s and went to pick up some take out lunch from Panera.  I went in to order the carpeting and started the process by consulting with one of the store flooring employees.  By the time I had someone, Olivia and Erick were back with me and we decided on a color that was very similar to the carpeting in her current room.  We were all satisfied, we placed our order, then hopped back in the car and headed to PISA.
Erick was an assistant coach for Olivia’s team so I sat by myself in the front row of the bleachers to watch the game.  It was hot in the arena since it was so warm outside today.  My dad came over and sat next to me and we watched the first half of her game.  The girls were really starting to play well as a team.  At the half way break, I told my dad that they had a pub upstairs and suggested that we go up a get a cold beer.  We went up and ordered two bottles of beer.  They were very cold and very refreshing.  From the pub, you are able to look through a window down onto the field that the Harmar Cheetahs were playing.  We sat up there and watched the rest of their game from the bird’s eye view.   My dad inquired about our upcoming trip to Florida for the family gathering.  I reminded him that we were flying out on this upcoming Friday, March 23, 2012.  He was a bit stunned that our trip was so soon.  We talked a little bit about the details of getting to the airport and times that he  and my mom should pick up me and Olivia.
The game had finished and we met the girls at the usual spot outside of the field in which they had played.  Olivia’s face was beat red from being so hot.  Olivia was one of the fastest kids in her grade and she loved to run.  Soccer was the best sport for her.  Coach Clyde did his usual reminder of the next weeks practice and the next game.   “We won’t be here next Saturday,” I said, “We’ll be in Florida”.  Coach Clyde replied as if he was envious of our warm weathered vacation but I reminded him that it was equally warm in our area this week.  We said our good byes and headed outside to the 70 plus sunny day.  That was the last time that a lot of people saw Olivia alive.
Olivia made a last minute decision and requested that she rides home in Pap’s car.  “OK”, we said.  Erick and I both knew that she wanted to ride home with Pap because there was an excellent chance that she could stop off at Glen’s Custard for some of the best custard around.  Sure enough, that is exactly what they did on their way home back to our home.  Being that it was St. Patrick’s day, Erick and I stopped off at the local six pack shop and picked up a growler of festive green beer for our evening.
Once home, Ainsley was awake and my parents left.  The four of us went outside to our backyard and played.  We had a board that was laying in the yard where Erick would set our fire pit on so that he could burn things.  Olivia lifted the board and found worms.  She loved worms and other bugs (except spiders).  Ainsley and I were sitting in the grass by Olivia while she was digging and just watched her at work.  Olivia picked up a very large worm and held it up near Ainsley’s face.  Ainsley leaned back as far from it as her back would allow her and made a terrible face of fear.  Olivia and I both laughed at Ainsley’s reaction.
Later that day, Olivia and Erick made homemade chicken fingers for dinner.  What a busy yet great day that was.
Posted by Liv Strong at 1:18 PM