By the chimney with care

After Olivia died, more than 3 1/2 years ago now, I vowed to her and to myself that I would never let anyone forget her.  Pictures of her stayed on the walls in our house, her bedroom door was left open at all times (even though it was starting to become cluttered with cards, gifts, drawings, and legal documents).  Erick, Ainsley, and I will watch home videos from time to time.

I've heard that some people who have lost a child can go in the exact opposite direction than where my grief took me.  I was told a story of a couple who had lost their 18 year old daughter in a car accident while she was in college in Florida.  After the funeral and "normalcy" returned to that family, the husband had requested that all pictures of his beautiful daughter be removed from the walls and no one should even speak of her. Understandably,  It was too painful for the father.  I'm not judging.  We all handle grief in our own ways.

I on the other hand, can't get enough of Olivia.  She is a part of everything  in me.  Since our fist Christmas card without her in 2012, she was still on the card.  She IS our family. 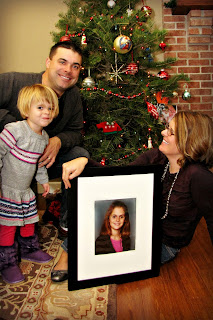 On our first Christmas without Olivia however, I did things a little different even though my Thanksgiving rebellion was a flop.  I didn't hang anyone's stocking over the fireplace except for Ainsley's and Penny's (our dog).  I hanged theirs on the staircase railing that year.  The Christmas tree, that usually stood in our front windows, was strategically placed to the left of our fireplace.  It looked awful there but I didn't care because it HAD to to different.  We had even planned a trip to Disney World over Christmas.  Anything to avoid waking up on Christmas morning without Olivia.  How can I possibly pretend to be excited for Christmas morning when she isn't here to open our bedroom door with excitement?  She would probably had been the most excited for Ainsley, who was starting to understand the Santa thing.  So, I called my Aunt Sherry, who lives a stones throw away from the Disney parks, to see if she'd mind some company.  We were welcomed with opened arms.  We flew out of Pittsburgh International Airport early on Christmas morning.  With that said, we'd have to trick our 2 year old  and Santa came on Christmas Eve morning for Ainsley's sake.

Now, it's our 4th Christmas without Olivia physically here but she certainly is present.  I have an ornament that looks like a red velvet envelop.  It's addressed to the North Pole and inside of it is a hand written letter to Santa Claus from Olivia.  I read it every year that I pull out our decorations and then carefully fold it back up and clip it back into the ornament.  She asked for a Go-Go Walking Puppy that year.  Santa obliged and it's still here with us.

This is the 3rd Christmas that I've gone back to hanging our stockings by the chimney with care.   All five stockings hang on the letters that  spell out the word PEACE.