When we became pregnant for the second time, we decided to find out the sex because of all of the clothing that we had stored in our attic.  Olivia had a ton of clothes.......  partially because I am a shopping addict and we had clothing donated to us by family members.  So, if we were having a boy, I was getting rid of all of those clothes that Olivia had grown out of.  THANK GOODNESS THAT WE HAD ANOTHER GIRL.  I often think about "what if".  What if we had a boy?  I would have gotten rid of Olivia's clothes and would have only had the clothes in her closet, which, by the way are still THERE.   They will stay there until Ainsley can fit into them.

On Sunday, I ventured up into the attic to look for the next set of bins of clothes.   I came across several bins of clothes that Ainsley could wear this summer, fall, next summer, next fall, the following spring, and then.......  we'll eventually hit the end of our supply. 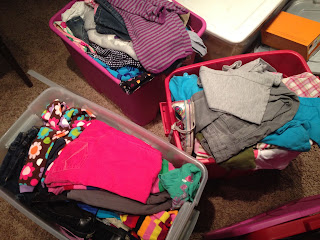 Going through the bins, I have mixed emotions.  Some of the outfits bring back memories or where we were when Olivia wore this.  Some of the clothes I will not part with even after Ainsley wears them.  They have too strong of a connection to Olivia.   I have created a new bin of clothes that I refer to as my memory bin.
Posted by Liv Strong at 9:49 AM