One of the best things that I ever did for both Olivia and now Ainsley is sign them up for zoo camp in the summer.  Zoo camp is a one week long day-camp where the kids get to be at the zoo for a full day and go behind the scenes  of the zoo.  It really came in handy for me when I was working back in 2011. 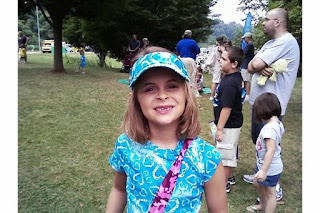 Because I was off every Friday, I promised Olivia and Ainsley and I would come down to meet her after zoo camp was over and we'd walk around the zoo until daddy was done with work.  My mom agreed to drive me and Ainsley down to the zoo after Ainsley woke up from her nap.

At 3pm, we pulled up at the zoo and the sky was turning a very dark, ominous color.  I put Ainsley in the stroller and pushed her up to the ticket gate.......  hello rain.  OK, that's ok.  Then came the thunder and frequent lightning strikes.   I rushed into the elevator to get up into the zoo.  When the doors opened, people were rushing out of the zoo and into the elevators.  I decided that I would try to run about 100 feet to the gift shop.  I took one step and a lightning bolt blocked me from my path.  OK, now i'm getting nervous.  I got back into the elevator and it took us down to ...... well, nowhere.  I had no where to go once I was off of the elevator except for the shelter that was provided by the escalators.  Ainsley, eating her fruit snacks,  never made a peep.  We huddled under the large METAL escalators while a violent storm was passing over us.  Not only was a scared by the storm, I kept thinking of the movie Jurassic Park.  At some point the power was lost.......  did the animals escape from their designated areas?  Creepy.

Finally, after a good half an hour, the storm let up.  Ainsley and I went back into the elevator and made our way into the zoo in search of Olivia.  I was still a bit spooked about my Jurassic Park thoughts at this point but we made our way to the education building where all of the zoo campers were being held until the storm was over.  As soon as Ainsley and I opened the door, Olivia came running up to us and wrapped her arms around me so tightly.  The zoo camp counselor whispered to me that Olivia was very nervous.  The counselors told all of the kids that the moms and dads were all waiting for their kids in the safety of their cars.  This did not satisfy Olivia.  Olivia said, "But my mom doesn't have a car."  She was truly concerned about me.  What a sweetheart.

We safely made it out of the zoo to the comfort and safety of Erick's car.  However, the afternoon wasn't all happy endings.  A local mother and her two daughters were caught in the same storm.  She and her daughters were in the comfort of their car but the storm brought such heavy rains that her car was sweated away from flood waters on a road that was adjacent to the zoo.   She and her daughters lost their lives that day.  I can't tell you how many times I think of this story and think of this mother's fear, the two young lives gone way too soon, and then......  after Olivia's passing, I think the worst - I had wished that would happen to me.  I wish that I would have died on that boat.   But then I think for how heartbroken I have been since 2012, I would never want Olivia and/or Ainsley to feel the pain that I do.  So, I continue to LIV Strong.
Posted by Liv Strong at 7:05 AM No comments: