After my sister-in-laws death, viewing, and funeral, it occurred to me that people experiencing the worst grief seem to hold up the strongest.  You all know what I mean.....  when we attend a viewing, we're always so impressed  how "well" the immediate family is in the situation.  My brother-in-law was stoic.  I know that he was hurting inside and wanted to curl up into a ball and pretend that this wasn't happening to him and his girls, but he didn't.  He stood in that funeral home (the same one that Olivia was viewed) and he greeted people who were paying their respects to Jen.

How is it that grieving people can cope?

March 29, 2012 was the date of our viewing for our sweet Olivia.  That morning, Erick and I went to the funeral home early so that I could do her hair.  Beauticians had offered to do Olivia's hair but I wanted to do her hair for the last time.  Erick and I arrived at the funeral home along with Erick's youngest sister, Anne.  We had asked her to meet us there in case we needed emotional support.   That moment that you look in a room and see a casket surrounded by  so many flowers, plants, wreaths, and stuffed animals  but inside of the casket is your 8 year old daughter......  it's breathtaking.  It's heartbreaking.  It's devastating.  It's just so, REAL now.  Remember, I haven't seen Olivia since that fateful evening 7 days ago.  Erick hadn't seen her since 7 morning ago but he hadn't seen her....... dead.

We immediately went to her and hugged her stiff body.  We cried but we also sat with her and felt so comforted by her presence.  It was so nice to be with her again.  It's been a long week and all we wanted was to be with her.  Granted, this wasn't the way we wanted to be with her but we could look at her and touch her.

I brushed her hair with her Hannah Montana hair brush, then cut a chunk of hair from the back of her head.  I tucked the hair brush somewhere in the casket.  It was hers.  For the last time, I braided her hair, one small braid on the side of her bead like a did so many morning for school.

Our family began to arrive, then friends.  Erick and I stood by Olivia the entire time as so many people came to pay their respects to our sweet Olivia.

To answer my own question fro earlier.  How do we cope?  How did we cope?  It's an out-of-body experience.  I could actually see my self hugging people like I was floating above watching this all take place.  We made it through that day because we had to.  We couldn't curl up into a ball and ignore that our daughter was dead.  Being there with her was the last chance we would get.

The Beginning of the End

T's only been 5 days since Olivia has left this earth and we've done so much.  We've dealt with the media, wrote an obituary, met with a funeral director, picked out a burial plot, picked out a headstone, and then  we picked a final outfit for Olivia to wear.  All sound so much fun, right?    Meeting with the funeral director was, well, weird because he is the father of one of my best friends.  I wouldn't have given her to anyone else though.  I knew that he would take care of my little girl.  While meeting with him, I asked the dumb question of how much  this would cost.  Who cares, right?  It has to be done......  the words, the question just came out of my mouth.  After hearing his answer, I immediately blurted out, "that is what we should be spending on her wedding in a few years."  Now, I know that weddings cost much more.......  you get the point.

There was only one outfit that I thought to be "perfect".  Her soccer uniform was just so "current" in her world.  It was an outfit that I  didn't need to have in my hands again.  Plus, she had two jerseys.  I gathered her blue soccer shirt and blue soccer shorts and put them into a plastic bag and handed them to the funeral director.   I didn't give him her soccer socks and it still bothers me that her feet would be cold.  Sounds ridiculous....... 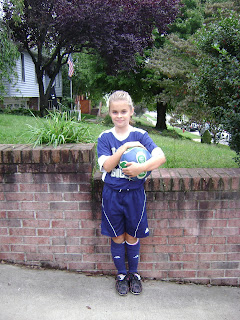 Her shoes and white jersey are displayed in a shadow box along with her trophies and metals from her 6 seasons of play.

We also gathered items that we thought that should be buried with Olivia.  For me, this wasn't hard and to this day I don't miss any of the items that are with her now.  I just miss her physical presence, obviously.

Her guitar - she was taking guitar lessons and was becoming quite good.  I did keep quite a few of her guitar picks.

Her American Girl Doll, Sara.  We finally bought Olivia a doll for her 8th birthday.

Her 2 favorite stuffed dogs,Vanilla and Cocoa.  They were a yellow and chocolate labrador retrievers.    When Olivia was younger, she used to pronounce the one Banilla.  She even had written stores about the adventures of Cocoa.  She had such an imagination.

Her large stuffed dog - I didn't know that this Basset Hound looking dog was a special one until she told me shortly before her death that she can't sleep without that dog.

A picture of all of us was placed in the casket along with a picture that Olivia put into a frame of the first time that she met her baby sister.  The frame fittingly said, SISTERS.

I also left her Hannah Montana brush with her because I braided her hair for the last time and cut a lock of hair from the back of her head.  It's so hard to believe that a lock of hair is the only physical thing that I have of my sweet Olivia.   However, when I look at my Ainsley I see Olivia and that gives me comfort.