For just a moment

Last month, Ainsley, Erick and I went on a family vacation .  We flew into Myrtle Beach, South Carolina on a Monday afternoon and hopped into a taxi , which took us to our favorite resort in Myrtle Beach.  Well, it's really the only resort that we've ever stayed in but we love it.  We've been flying to Myrtle Beach  and staying at the Island Vista Resort since 2013.  This year was our fourth time.  The resort is a beach front condominium complex with 2 pools, a lazy river, palm trees, the ocean breeze, a great restaurant,  plus a tiki bar with an island feel.  Actually, despite the loud waves from the Atlantic Ocean, you can almost convince yourself that you're in the islands.

This year's trip to Island Vista Resort was to be the BEST ever because we were being joined by Ainsley's best friend (BFF), Nicole and her family.  Nicole also a seven-year-old little girl with a fantastic spunk about her, is Ainsley's absolute best friend.  These two girls  are practically sisters.  They have been pretty much inseparable since they were first introduced in 2012.  Nicole's oldest sister, Natalie, now 14, was on Olivia's soccer team and in third grade with her at the time of the accident.  Their mom was/is one of those friends that always made time for me while we were grieving.  She and I have become very good friends over the past 5 years.

After Olivia's death, I would go for long walks with a few moms on a weekly basis.  Nicole's mom was one of the faithful walkers.  Nicole and Ainsley were only 2 years old  when they were introduced during our walks.  The two of them sat in their strollers as I and the other moms walked the neighborhoods of Springdale.  From that summer on, Nicole and Ainsley have been attached at the hip.    And, they planned to be attached at the hip while on vacation this summer as two best friends do. 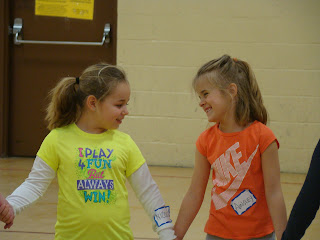 We arrived at the resort and headed straight up to our room where we are greeted by Nicole, her mom, and her middle sister, Jessica.  We get royal tour of the 3 bedroom suite.    We were introduced to our sleeping arrangements and started to unpack while the girls got ready to head to the beach for the evening.  We made our way to the beach to meet up with the rest of Nicole's family.  After playing on the beach  for an hour or so, we moved our crew to the tiki bar for some adult cocktails and 4 non-alcoholic daiquiris for the girls  Nicole ordered up a Pina colada daiquiri (for the third time that day) while the other girls ordered up other flavors  like strawberry and watermelon.  We enjoyed our beverages while watching a Luau.  Another great amenity at the Island Vista Resort is the evening events or shows that they have for the guests' entertainment.

It's started to get darker and time  for the girls to get showered.  Erick and I had the master bedroom which meant that we had the biggest bathroom.  The  stand-up shower was big enough to fit all 4 girls so it was perfect for Ainsley and Nicole to shower together.  Because, that's what best friends do on vacation.  I got them set up with shampoo and soap, along with wash cloths.  I could hear them laughing in the shower.  This was going to be a great few days at the beach.  Then, all hell broke loose.......  "NICOLE THREW UP!"  Ainsley was yelling.  I ran back into the bathroom to find Ainsley pinned up against the tile wall of the shower , Nicole was holding her belly and a puddle of Pina coloda was on the shower floor.  At first, we all thought that the stomach issue was caused by swallowing too much sea and pool water, but as the vomiting persisted throughout the night, followed by diarrhea, we had suspicions of a stomach virus but held out hopes  for option #1.

The following morning, Nicole was still feeling under the weather so she stayed in bed while her mom watched over her and tried to nurse her back to health.  Now, it's just the 3 girls and 3 adults spending time at the beach.  Ainsley and Jessica really bonded that day as they dug  for sand fleas and sand crabs.  That evening the six of us all took an Uber to the Flying Fish in Barefoot's Landing.


The next morning, Nicole is still not well but we're all feeling fine so we were convinced (or perhaps still holding out for hopes) that her illness was the result of ingesting too much sea and pool water. (and not to mention those 3 Pina colds).  Again, Jessica and Ainsley had another great day at the beach.  At dinner that night, Jessica got up from the dinner table and swiftly walks into the bathroom and then..........OH CRAP.  Victim #2.

Thursday came.  Jessica AND Nicole are ill and their mom and dad have been taking turns caring for them.  At this point, I wanted to put police tape over the bedroom door.  Being confined to a condo with  a stomach virus that hitting people hard and without warning is a nightmare for a germaphobe (ME).  Natalie and Ainsley were the only 2 healthy kids for our last full day at Myrtle Beach.

For just a moment, on that final beach day, Erick, Ainsley, Natalie, and I  were a "family of four" hanging out at the beach.  Natalie, Eric, and Ainsley swam out in the deep as I soaked in the sun while sitting in the surf.  THIS is what my reality should be like - Ainsley and her 14 year old big sister.  Later that day as Natalie and Ainsley took a walk on the beach looking for ghost crabs, I sat on the balcony of our condo and watched the two flickers of lights from their flashlights bounce up and down the shoreline.   This is exactly what Olivia would be doing with Ainsley if she was still here with us. 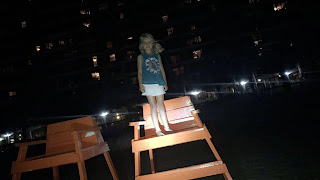 (Picture taken by Natalie as they looked for ghost crabs)


Yes, but also touched by Natalie's love for Ainsley.  She  treated Ainsley like a sister and that is what Olivia would want for her little sister.

I am also thankful for the people who have been put into our lives after our tragedy.  They are blessings and are cherished.