When my sweet Olivia died in 2012, she was just shy of 9 years of age.  At that time in her life, she was an active young  guitar player, elementary school student who loved art, a big sister, and a soccer player.  At the time of untimely death, those were the things that defined her  as an 8 year old girl.

You never know........  that's what is so darn agonizing.  Not knowing.  Not watching the evolvement, the growth, the maturity of my sweet  Olivia over the past 7 years now.

She would be 16years old.

Like I mentioned before, Olivia was a soccer player with a group of great girls.

They started out pretty flat but as a team, they really started to pick things up and improved tremendously.    It was such a fun time during her existence. 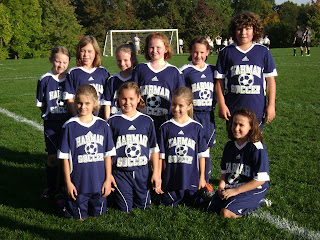 It is now soccer season as well as Homecoming season, and I am drawn in daily of the reality of "what could have been".

About a mont ago, one of Olivia's former teammates/friend posted a picture on Facebook of herself and the rest of the Junior Class Springdale High School Soccer  Players.  But, there seems to be one thing missing...... 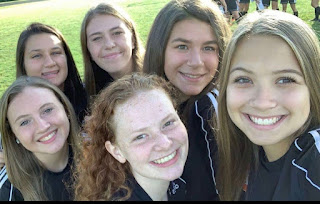 Would she have continue her soccer "career" and been  playing under the lights?  Would she be a guitar player, strumming along to Taylor Swift?  Would she be attending the high school Homecoming Dance?  With a boy?  With friends?